Fold Toilet Paper while still on the Roll

Some hotels and resorts have taken TP origami one step further by making more elaborate folds:

Folding toilet paper into a triangle is so prevalent that an elderly Japanese gentleman invented an automated toilet paper folding machine called "Meruboa". With the push of a lever, Meruboa will fold the first sheet of toilet paper into a perfect triangle. Manufacturers plan to make over 10,000 Meruboa holders per month, valuing over one billion yen per year. Original references no longer available but images of Meruboa can be seen here, estimated at $75 each. 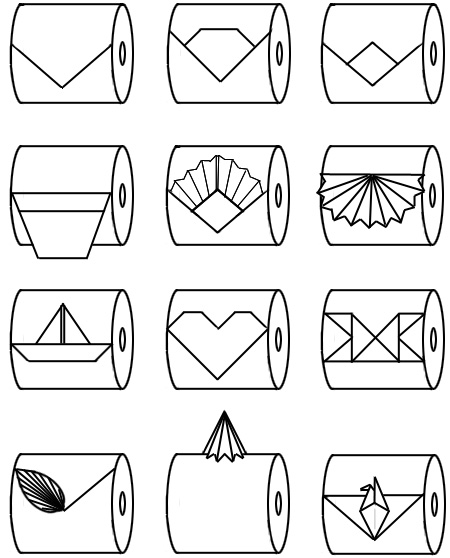 which shows the folded toilet papers. Linda Wright published a book showing how to fold elaborate origami designs with toilet paper. These TP creations are above and beyond the expected (see below for book review).

Folding One Sheet of Toilet Paper

Folding origami from one sheet of toilet paper is an example of how origami can entertain and amuse people of all different mindsets. If you are going to sit for a long time, why not fold an origami flapping bird with toilet paper? 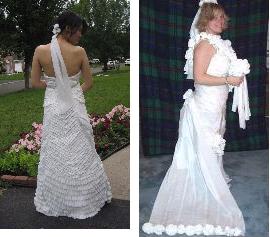 When designing this web page, we stumbled upon wedding dresses completely made of toilet paper. Interestingly, they are all very beautiful: some have origami-like roses, pleats, and weaved pattern not unlike the origami creations made with paper. TP origami wedding gowns use glue and/or tape only. [Photos from www.cheap-chic-weddings.com]

Amazing origami stegosaurus, praying mantis, and Pegasus made from toilet paper. These are advertisements for All Bran cereal. See them here. 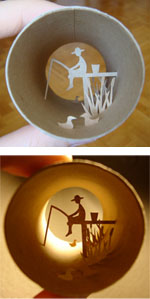 Don't throw away those cardboard toilet paper tubes! You can convert these into cut-out/collage art like the ones done by Anastassia Elias. Small in size but big on details, these toilet-paper tube art look great in silhouette. Each piece tells a story much more interesting than the original humble cardboard tube. See more here.

Toilet paper folder and dispenser prototype made with Lego pieces (by dayammerkid). This dispenser is quirky & fun and shows the innovative nature of the creator.

Toilet paper dispenser Deluxe model by tp4unme. This dispenser is more serious: designed for people who have had a stroke or are incapacitated in other ways. Comes with hands-free, infra sensor so as to avoid contamination.

Some toilet paper have interesting prints on it such as hearts, monograms, even Sudoku and $100 toilet paper. Browse from an incredible selection of patterned toilet paper.

If you want to fold origami with TP but don't know how, you can have the instructions printed on the TP like the paper crane toilet paper available in amazon.com.