The history of origami is under debate. Unlike other art forms, paper degrades quickly leaving no artifacts to suggest where origami originated and who first invented it. The information listed here provides a good overview of origami but is not an authoritative analysis of the subject. For detailed information regarding the history of paper folding, consult the works of John Smith, David Lister, and Koshiro Hatori.

Textbooks will say that paper was first invented in China by Cai Lun (also written Ts’ai Lun) in 105 A.D. However, archeological evidence suggest that paper was invented even early than this. One can imagine that if there’s paper, then the paper may have been folded as well. There is no evidence of this but, if it was true, then paper folding would have started in China. [Photo: Cai Lun (Ts’ai Lun); inventor of paper]

That being said, there is very little examples of origami or paper folding in China. The “yuanbao” is probably the oldest example: these are paper folded to look like gold nuggets. The pieces are burnt as offering to the deceased. It is not clear when the tradition of folding yuanboa started (possibly near 1000 AD) but it continues even today.

Another example of paper folding in China is Golden Venture Folding (Chinese Paper Folding or 3D Origami). Here, small pieces of paper are folded into triangular units which are then assembled into large models. No one knows when these triangular units were first made, but they do appear to be of Chinese origin since they were introduced to the USA via illegal Chinese immigrants on the ship, Golden Venture (1993). Read more 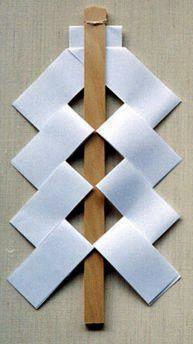 Paper Folding in the Japan

During the 6th century, paper was introduced into Korea and then into Japan by Buddhist monks (sometimes attributed to one monk in particular, named Dokyo). It is in Japan that paper folding became an art form and evolved into what we know today as “origami”.

In Japan, paper was expensive and not available to the general public. Paper and paper folding was limited to religious rituals and formal ceremonies. [Photo: Gohei with two strips of Shide]

Some of earliest examples of paper folding (with cutting) are “Shide”; these are zig-zag shaped paper used in purification rituals. Shide can be attached to straw ropes to designate sacred locations (Shimenawa), attached to alters, or attached to a wooden staff and used as purification wands (Gohei). It should be noted that Shide were probably made with fabric, but then later switched to paper. See how to fold Shide here

In Japan, there are rules of etiquette when it comes to the giving and receiving of gifts. Paper adornments were folded in different ways to symbolize different things. For example:

“Origami Tsuki” was a folded piece of paper that accompanied a valuable gift and it served as a certificate of authenticity.

“Noshi” was a folded piece of paper that accompanied a gift and functioned as a token of good fortune. More information about noshi here.

“Tsutsumi” was a formal gift wrapper. These ceremonial folds were simple and symbolized sincerity and purity. [Photo: Noshi]

There is very little evidence of recreational origami prior to the 1600’s but by the 17th century, play-origami was prevalent in Japanese culture so much so that you could find kimonos decorated with paper cranes.

A print showing ranma with origami models. From mfa; Enlarge.
This shows a ranma (decorative wood paneling) with six origami models including the paper crane, the classic boat, and a modular cube (1734, see analysis by Koshiro Hatori). These elements suggest that origami was well established in Japan by the 1700’s.

The first book published about paper folding was the “Tsutsumi-no Ki” by Sadatake Ise (1764). It contained instructions to fold 13 ceremonial folds such as the noshi and Tsutsumi described above. [Image from Tsutsumi-no Ki.] 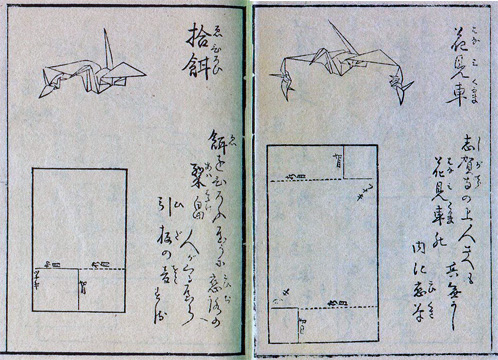 Next, a series of books called “Window on Midwinter“ (Kayaragusa, 1845) was printed. These books were about Japanese customs and there are two sections dedicated to paper folding. [Note: due to an error in translation, these books are sometimes mistakenly called Kan No Mado.] There was only one copy of this collection made; it is currently owned by the Asahi Newspaper in Osaka.
After this point, origami was well on its way. The Europeans also practiced paper folding: ideas and methods started to be mixed and developed until origami is what we see today.

The history of paper folding in Europe is a story in itself. Most origami historians believe that early paper folding in Europe developed more-or-less independently from that of Japan. The main reason for this is that the origami models found in Europe tend to have a “grid” crease pattern (squares, rectangle, diagonals). In contrast, the ceremonial folds from old Japan tend to have judgement folds where the exact location of the cease is up to personal taste & interpretation. See Koshiro Hatori’s article which compares the development of origami in the East and West in the conference proceedings, Origami 5.

Through battle and conquest, the secrets of paper and paper-making left China in 750 AD and began their journey into Central Asia and then to Europe. 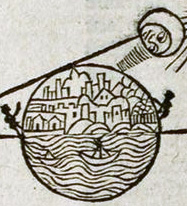 The earliest published evidence of paper folding in Europe is probably from the 1490 printing of the book “De Sphaera Mundi” (On the Sphere of the World) by Johannes de Sacrobosco. In this book is a woodcut print of two boats, one of the boats looks very much like the classic origami boat which is sometimes used as a paper hat.
[Photo from here]

This is a (small) picture of a boat and some historians are not convinced that this is an origami boat. However, if this is indeed an origami boat, then it would suggest that paper folding developed in Europe independent of paper folding in Japan because in 1490, Japan would not have this type of recreational folds.
In Act IV of the play “The Duchess of Malfi” by John Webster (1614), character Bosola refers to paper prisons which boys use to imprison flies.

“Our bodies are weaker than those paper-
prisons boys use to keep flies in;“
Historians believe that this is in reference to the classic Waterbomb model. 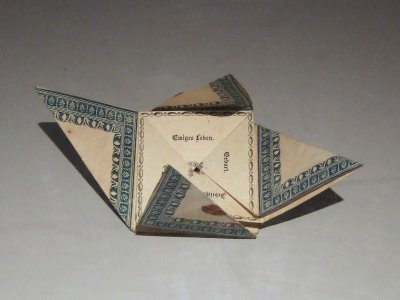 In Germany and other parts of Europe, baptism certificates called “Patenbriefs” were given to babies by their godparents. These Patenbriefs were folded in a 3 x 3 or a 4 x 4 grid. Patenbriefs existed in the 17th, and 18th century; though, the oldest ones found on the internet are from the 1750’s. [Patenbrief (1831)
3 x 3 fold with twist closure.] 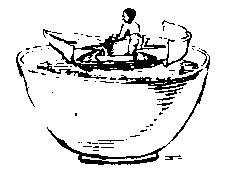 Image from “Hanenpoot”. Image from here.
The next textual evidence of origami in the west would be a drawing from a picture-book of a boy sitting in a paper boat floating in a tea cup. This image is from the book “Hanenpoot” by Willem Bilderchijk (1806). The boat is identified as the traditional Chinese Junk.

By this time, origami was quite common across parts of Europe. There is mention of people folding paper into various shapes such as kites, boats, and birds. One origami model which is almost definitely from Europe is “Pajarita” (little bird). Origami historian, Vicente Palacios, has accumulated a mass of evidence suggesting that Pajarita was first created in Spain. The same model exists across Europe under different names.

You can see Pajarita in European paintings from the 1800’s such as “The Merrymakers” by French painter, Carolus-Duran (circa 1870). The lady in black is holding Pajarita. See more examples here.

To this day, Pajarita is used as the logo for Asociación Española de Papiroflexia (Spanish Paper Folding Association).

From Europe, origami then spread to South America and then to North America. In the 1950, Akira Yoshizana and Sam Randlett developed a standard set of origami symbols to describe how to fold paper into models. These symbols remained essentially the same and is used in origami diagrams today. [Note:
David Lister suggests that it was Sam Randlett and Robert Harbin who formalized the use of the origami symbols.]

To see a timeline, or different perspectives on the history of origami, please visit these sites: