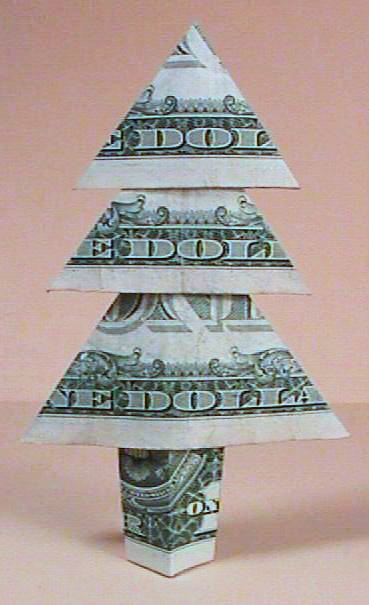 This dollar bill Christmas tree is by Clay Randall and used to be found on this web site: http://members.cox.net/crandall11/money/tree/
But this site is no longer active and we have captured the image and reproduced it here. Please contact us if you are the rightful owner of this diagram and wish for it to be removed. Otherwise, thank you for sharing your talent.

Okay, this isn’t the greatest, but I get a lot of requests for it, so here goes. This is as attractive as those pine scent cutouts you see hanging from people’s rear-view mirrors and apparently as popular.

I’d suggest that you look through all the instructions before attempting to follow along – it will give you a better idea of why you are doing specific things, and how these affect the final appearance

Start by folding exactly in half lengthwise so that the reverse face is outside. (The green of the greenback is the right color for the tree.)

From the left-to-right center, fold one corner under at approximately the angle shown. This will be called the side fold, and will appear later in these instructions.

Fold the opposite side under in the same way from the other side (another side fold). The triangle formed on the upper layer is all that is going to be showing (from the front) when we have completed this piece 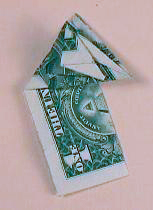 Continue to fold the remainder in any way desired so that it fits within the boundaries of the triangle. Since this will all be hidden from view, neatness doesn’t count. Do try to minimize the number of folds and overall thickness of this section – it will help later.

Repeat the previous step for the other tab.

This time after opening the bottom and side folds, tuck the remainder of this tab between the front of the triangle and the other tab’s bottom fold. This will lock the two in place. 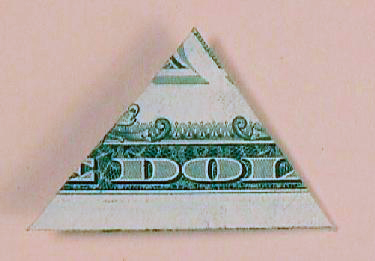 Now take two more bills, and fold them approximately two-thirds and one-fourth of the way lengthwise. Repeat steps 2, 3, and 4 for each of these bills to create two more triangles that are different sizes. (This picture shows the opposite side as shown in step 2.)

When you have finished, you will have three triangles that are different sizes. This picture shows three of them from the back side. 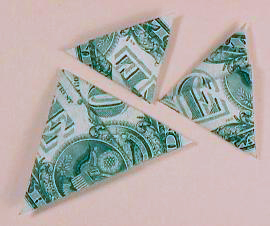 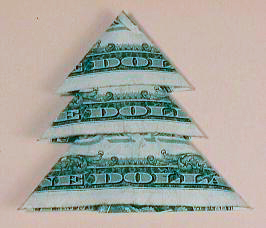 Now take the three sections and insert the top point of the two larger ones in between the front bottom and bottom fold of the next smaller section. Don’t push the sections too tightly together. If your folds are reasonably tight, the whole thing will stay together. 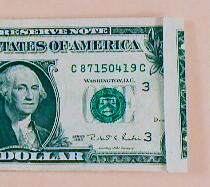 Take another bill and fold over about one third to one half inch of the end. Fold over again and again, making a nearly flat roll out of the entire bill. 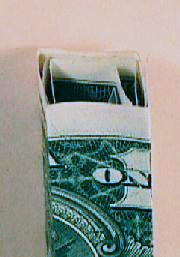 Unroll the flat roll you just made. Reroll it in a square roll, using the creases you made in the previous step as a guide. When rerolling this section, it will help sharpen the outer creases as you reroll to make a tighter square.

Flatten out one end keeping the other end square. On the flat end, fold the two corners in toward the center line as shown. This pointy end will get inserted in the largest triangle made in the previous steps, and become the trunk/tree stand.

These things will stand up on their own, provided that you carefully stack them, and bend the upper portion of the trunk slightly forward or backward to achieve the correct balance. If someone else wants to come up with a better tree stand, knock yourself out.

Okay, these pictures aren’t of the nicest tree I’ve ever made. (I was in a hurry to get this page together and up in time for Christmas.)

Experiment on your own, and you shouldn’t have too much trouble making it nicer looking than the one in these pictures.