This money Eyeglasses is by Clay Randall and used to be found on this website: http://members.cox.net/crandall11/money/glasses/
But this site is no longer active and we have captured the image and reproduced it here. Please contact us if you are the rightful owner of this diagram and wish for it to be removed. Otherwise, thank you for sharing your talent.

As with all these designs, try to start with relatively clean, crisp bills. It will go much easier. All folds should be sharply creased. It helps to go over the fold with a fingernail on a flat, hard surface.

I suggest that you read through all the instructions before starting. Doing so should help you in understanding the orientations of the pieces that will be put together.

(I used a Casio QV-10A digital camera to get the images. I’ve tried to reduce the resolution of the JPEGs to the very minimum required to minimize your download time, but it is still graphics-heavy.) 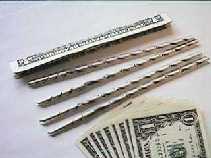 Start by rolling up four of the bills into tight tubes (as explained here).

Then fold the remaining bill exactly in half lengthwise, twice.

Now you have the pieces.

In the following sections, there are several places where the instructions will specifically say to use one end of one of the tubes. Pay attention to this, as several steps will not work unless you have used the correct ends.

The end of the rolled bill on the left side of the picture is the end where the wrap ends. For simplicity, I’ll refer to this below as the outside end. The end to the right will be called the inside end. 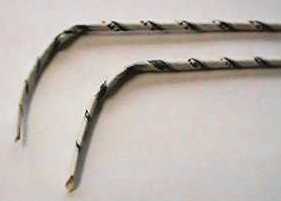 Two of the tubes will make the earpieces for the glasses. For each, take the outside end and bend about 1 and 3/4 inches in an arc as shown. 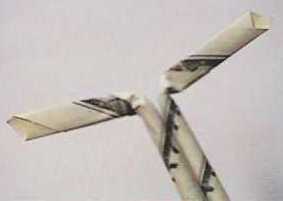 On the inside end of the earpiece tubes, flatten out about 5/8ths of an inch of the tube, and then sharply make a right angle with the flat portion. Make the two go in opposite directions. These tabs will be used to attach to the rims. 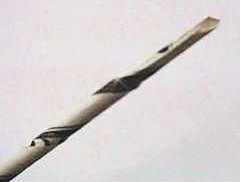 Each of the two remaining unused tubes will become a "rim". On each of these, pinch down about 1/2 of inch of the inside end.

Flattening the end, and then creasing the flat portion into a V shape works nicely. (The point is to make this end small enough to be inserted in the opposite end, as described in the next step.) 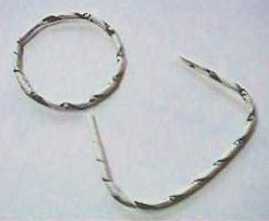 Okay, the top bill in this image shows the “half-top-to-bottom” fold. 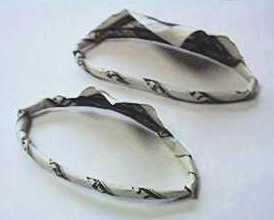 Carefully start unwrapping the rim tubes. It helps to squash the circular shape to a very elliptical shape while doing this. Do not disturb the wrap any more than necessary to achieve this – you want this to be able to re-wrap tightly. Unwrap about two layers as shown at top. 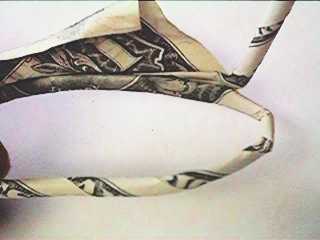 Where you have unwrapped the rim tube, insert the tab on the inside end of one of the earpiece tabs. Not shown in this close-up, the earpiece outside end would be "down" in this orientation. (See next illustration.)

Re-wrap the end of the rim around tightly to capture the tab from the earpiece tube. Restoring the rim tube to a circular shape after re-wrapping will help prevent this from unwrapping again.

Repeat the step above for the other rim & earpiece, but sticking out the opposite side. You now have two complementary sides. The remaining bill will become the nose piece / bridge to hold the two sides together.

Slip the other rim over the long end of the flat bill, making sure the earpiece is in the right orientation.

(I’ve skewed this slightly in the illustration for clarity. You really want this to wrap straight over top of the previous step.) 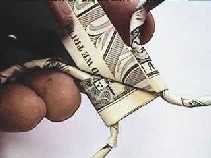 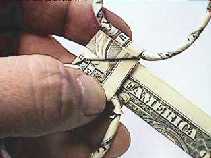 Wrap the remainder of the bill around underneath. Make this tight. If you don’t get this part tight, the whole thing will fall apart about
thirty seconds after you’ve completed it. 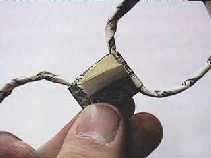 Continue wrapping the remainder around tightly. If you have closely followed the previous steps, the remainder should end up on the same side of the rims as the earpieces. It is not terribly important, but having it end up on this side will hide the next little tuck…

Skew the end slightly to one side, and tuck what you can under the previous wrap as shown. If you have wrapped the "nosepiece" tightly enough, this will keep it all together.

Well, that’s about it. As you can see from this picture, which includes my real eyeglasses, this design is just about life-size.

Don’t be too surprised if your first attempt at this design doesn’t come out looking quite as neat as the illustrations. I’ve probably done hundreds of these over the years, and it takes a while to get used to getting them "just so".