Weaving patterns can be simple with a one-up-and-one-down sequence. Add color to spice up the look.


Begin to introduce variations. Instead of one-up-and-one-down, change to two-up-and-two-down. This is still quite simple and can be accomplished by children.

Things become a notch more interesting when you use both patterns simultaneously:
row 1: two-up-and-one-down
row 2: two-down-and-one-up

A diagonal effect is seen when you offset the pattern in subsequent rows. Here:
row 1: two-down-and-one-up
row 2: same as above but offset it by one

Similar to the case above with checkerboard effect, the diagonal effect can be expanded to two-down-and-two-up.

Similar to the case above with the checkerboard effect, the diagonal effect can be expanded to two-down-and-two-up.


Weaving by groups of 3 or more also exists. Here, the pattern emerges only if the sample is large enough. 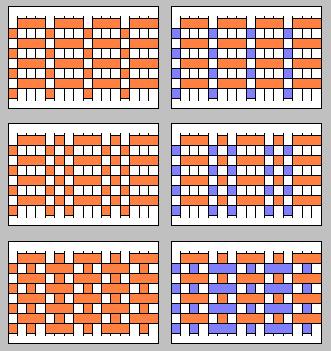 
This pattern is the same as the one immediately above: namely, it has a diamond shape but with a dot in the middle. 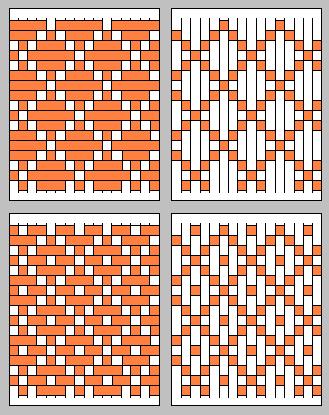