Before you read about origami tessellations, do you know what is a tessellation? If not, please read this section first.

One method is to:

Method 2:
Another method is to fold an entire sheet of paper into a a grid and then create a model from this grid of creases. When folding the pre-creased paper into the final model, it sometimes works best to start from the center of the paper and work outwards. Alternatively, begin working from one edge of the paper and extend towards the opposite edge.

Often, the pre-creased paper needs to be jiggled and tugged to coerce it into its final shape. Three words of advice: patience, practice, and perseverance.

Flat or 3D?
Most origami tessellation models are flat. They have no volume and look like a piece of paper with geometric designs on it. A closer examination of the model will show that it is not uniformly flat – there are raised ridges where multiple layers of paper lie one on top of another.

If you hold the model up against a light source, the amount of light passing through the sheet of paper will depend on the number of paper layers. Often, you can see a pattern that is more elaborate than the one seen from a surface-view of the model. [Photo: Flor by Melisande]

Some origami tessellations pop-out above the plane of the paper. These models have depth and can be considered 3-dimensional. [Photo: hexagonal tessllation stars, top and bottom view. By Melisande]

Fujimoto’s pyramid is also a flat model, but Joel Cooper used paper that was flexible enough that he could “stretch out” the model to appear 3 dimensional. A more traditional rendition of the same model is squished flat. [Photo: variation of Fujimoto’s pyramid folded by J Cooper]

Incorporated Tessellations
Lastly, some models are not exclusively origami tessellations, but have tessellations incorporate within their design. Particularly noteworthy are Joel Cooper’s masks. These are made with a method called “pleating” but they also contain large sections of tessellated origami. Robert Lang’s Koi fish has tessellated sections to simulate fish scales. Beth Johnson’s Sheep is a two piece model with the sheep’s wool being tessellated. [Photo: Mask by J Cooper and Koi fish by R Lang, Sheep by B Johnson]

You can Tessellate Too 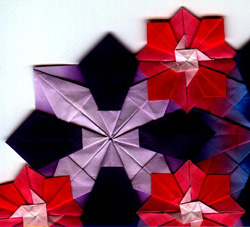 Previous to this, Mick Guy had made many Escher-inspired origami composites where pieces are laid side by side like tiles on a counter top. These were different than the origami quilts mentioned above. Unfortunately, there are no photographs of Mick Guys work but you can read more about it from David Lister’s essay on tessellations.