This page defines some of the origami symbols, lines, and arrows used in origami books and diagrams. Many origami creators use creative ways to describe how a piece of paper should be folded. The list here is generally accepted by most origami artists. See this article for more details.

A solid black line is used to define the edges of a sheet of paper.

A gray line indicates a crease line: this is the place where the paper has been folded and unfolded, leaving a crease.

A dashed line indicates the location of a valley fold.

A dash-dot-dot line indicates the location of a mountain fold. Sometimes one dot is used instead of two giving it a dash-dot-dash-dot pattern.

A dotted line is often used to indicate an action that occurs behind the layers of paper. The dotted line is what you would see if you had see-through (x-ray) vision. 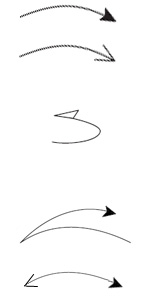 An arrow with a filled (black) arrow-head is used to show directionality in a valley fold.

Some origami artists use an “open” arrow-head (letter V instead of a triangle). This type of arrow can be used with a valley fold or a mountain fold.

An arrow with half an arrow-head which is hollow (it is white or not filled) is used to show directionality in mountain folds. 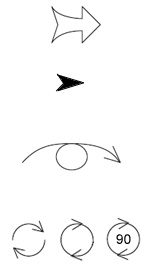 A rotund arrow indicates an action such as “push in” or “pull out” or “inflate”.

A filled arrow head (without the stem) is often used to indicate “push in”.

A loop-the-loop arrow indicates “turn the model over”. Flip the model so the top side becomes the bottom side.

These symbols indicate “rotate”. Sometimes there is a number or a fraction in the center. The “90” means “rotate 90 degrees clockwise”. The same move can be described with “1/4” which means “quarter turn clockwise”. 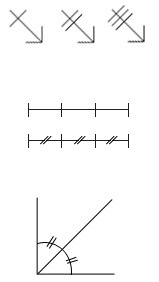 Segmented lines indicate “fold into equal sections”. As shown, it would mean to fold the paper into 3 sections of same size.

Similarly, angles can be divided into equal sections. Here, the corner of the paper should be folded in half to bisect the angle.