This page is dedicated to origami factoids that don’t fit anywhere else, but are too interesting to omit. We have listed fun facts with accompanying photos. It’s a visual representation of some of origami’s best. See also John Smith’s Records and Curiosities for an eyebrow-raising list of origami factoids. Jane Hamilton has an extensive list of Origami Sightings. It is a huge list of incidences where origami has been sighted: in TV & movies, in books & magazines, in science & art, in food & fashion, and more. Talk about a collection of origami factoids!

The smallest origami crane is most likely made by Mr. Naito of Japan. He used progressively smaller and smaller squares until the the smallest crane was made from a 0.1 x 0.1 mm square. Naito folded the tiny crane using a microscope and special tools which he made himself. Read article or see more photos here and here

Most people cannot fold such microscopic creations, but you can still challenge yourself by folding cranes and flapping birds using smaller and smaller sheets. Photo by Elfer. 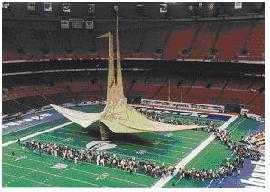 In August 1998, a 207 feet origami crane was made in Odate, Akita, Japan. Click here to see photo by Web Japan.

In November 1999, Wings for Peace created the world’s largest paper crane: it was over 215 feet wide, and approximately 1750 pounds. Seattle, WA, USA. Photo from World Peace Peace Project for Children

A Giant King Cobra (Ronald Koh), measuring just under 150 feet long, was folded in Singapore to celebrate the year of the snake. Sentarosa, Singapore, March, 2001. Photo by Singapore Origami Web.

Candy wrappers can be folded into origami models. They can also be made into long chains: the longest one being 48,077 feet in length. In Mexico, candy wrappers have been weaved into fashionable handbags and purses. This helps clean up the environment and allows native Mexican Indians to become self-sufficient. Watch a video of one being made or buy one from Ecoist.com. Photo by J Marcoschamer.

June 2003: While in space, astronauts in the International Space Station folded a polyhedron (called a hebesphenomegacorona) and stuck it to the window. Outside the window is a view of the Pacific Ocean with clouds overhead. There you have it: origami in space! Photo from Science at Nasa, Picture of the Day, The crew of ISS Expedition 7.

In 2003, the British Origami Society and David Brill orchestrated the assembly of the longest origami train. Organizers invited origami enthusiasts from all over the world to send paper train cars. The 1,550 train cars arriving from many countries were connected into a 254 meters long train. Unfortunately, Guinness World Records did not include this feat into their book of records stating that it was too specialized. Photo by Robin Macey.

In 2005, Chronicle Books published a book called Baby-Gami. If Origami means fold paper then does baby-gami mean fold baby? No, Baby-Gami is all about folding blankets around babies. Sort of like… sushi. This art form is actually called swaddling and is well known to mothers throughout the world. Young babies are wrapped up tight so they feel like they are still in the confines of the womb. Older babies are wrapped up in a sling so that they can be carried around. But, this book goes further – it has fashionable, stylish wraps. See Baby-Gami here

Akira Yoshizawa is considered the Grand Master of modern Origami. He created over 50,000 origami models; invented wet-folding; and developed a method of diagramming origami instructions. Mr. Yoshizawa passed away in March 2005, he was 94. Photo from Origami Chile. 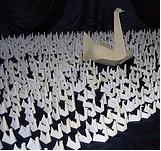 In July 2007, Vignesh Cumareshan made 1002 origami swans for an Arangetram (Musical Graduation Concert). The 1000 small swans were made from 10 cm square sheets of paper. The two large swans were made from A1 paper (59.4 cm × 84.1 cm). Swans were chosen for the ceremony because the swan is the vahana (vehicle) of Saraswati (the Hindu goddess of Music). Photo by V Cumareshan.
Do you know of any more origami sightings? Let us know!