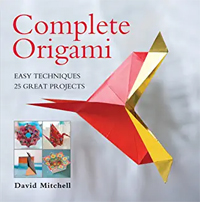 If you think that Complete Origami by David Mitchell is complete, then think again! It is probably impossible that a single book can encompass so much information that it is “complete”. However; having said that, this book is very good, if not fabulous! It contains a variety of origami topics and styles which, as a whole, covers a broad range of what origami is about.

The book is 160 pages long with the first 23 pages devoted to introduction, a brief history of paper folding, and techniques/terminology. The remaining pages are for origami projects: 25 projects in total. Each project is introduced with a short paragraph and is accompanied by side-bar with pertinent information. Origami instructions are in the form of line-drawn diagrams with written text that is immediately below the images. Finished projects are shown in color photographs.

Complete Origami by David Michell starts with the traditional Samurai Helmet, the “Kabuto”. This is an example of pure origami where only valley and mountain folds are used; every fold is exact, defined, and has a function in the final model.

“Banana Boat” is even more simple than the kabuto. However banana boat diverges from pure origami. First, it uses a triangular sheet of paper instead of a square. Second, the locations of some of the folds is not strictly defined; you must use your own judgment. Third, the paper is white on one side and colored on the other side. The difference in color affects the appearance of the finished model.

“Cormorant on a Rock” introduces the reader to reverse folds and the concept of dual subjects (the bird and the rock). Very elegant model and not too hard to fold.

Piranha introduces the reader to the the blintz base, the windmill base, and the concept of action origami. When you tug at the tail, the mouth of the piranha opens and closes.

Next, the bird base is introduced with the traditional crane or “tsuru”.

“Clingons” can hang onto one another; they demonstrate the versatility of the bird base since they look more human than bird. 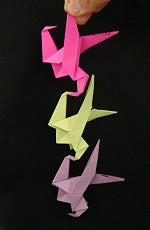 Lover’s knot introduces the reader to double blintzing and the technique of pull-out-squash.

Pull-out-squash is also used when converting the crane to a flying crane.

The “Tato” (folding purse) uses a root 5 geometry which is uncommon in traditional origami.

“Give Me Sunshine” is a geometric, bas-relief model representing the sun. The model is made by creasing the paper completely and then collapsing it to the proper shape: a crease-and-collapse design.

Shipwreck is an example of multi-piece origami. This type of origami is often seen in larger displays where many different models contribute to the general theme of the piece. Shipwreck uses the 60 degree folding geometry (equilateral triangle). Although not a butterfly or a bird, this is a sample of representational origami – a ship sinking!

“Coasters” combine 4 simply folded sheets of paper to make beautiful designs. These polygonal decorations are examples of modular origami. Modular origami is similar to multi piece origami (as in shipwreck) in that more than one sheet is used. However, in modular origami, the pieces stay joined even without the use of glue or tape.

“Artifact” is a polyhedron made from six sheets of paper each folded in the same way. The six sheets are assembled into 3 rings. Interestingly, the 3 rings are not connected to one another but are interlocked. The concept of silver rectangles is introduced. This is the first “advanced” model in this book.

“Dresden Bowl” is a crease-and-collapse design. This is an example of a curved design. Some creases were omitted so that the paper retains its resistance: the tension allows the curves to persist.

“Love Bird” appears as a bird, but when placed in front of a light, a heart is visible. This is an example of translucency. What appears to be a rather simple bird is actually a clever design which allows for the translucency of the paper to give the model an added level of depth.

“David’s Star” is a crease-and-collapse design. Here a single sheet of paper is made into a stack of six-pointed stars (Star of David). Model is easy to fold, but collapsing it will take a bit of courage for the uninitiated. The concept of bronze-sized paper in introduced. Bronze rectangles are useful in that they easily form 60 degree angles.

At first glance, this “Enigma Bowl” may appear quite plain, however, upon closer examination, you will notice some interesting features. The rim of the bowl is a 8-pointed star, the hole is in the shape of an octagonal, and the base of the bowl is a square. It is made from a complex base unlike those found in traditional origami.

“Gaia” is made from six sheets of paper, each made from the enigma-base above. The six sheets are folded and assembled. Then, the model is further manipulated by opening flaps to form windows. Complex structures such as Gaia are not possible when using a single sheet of paper.

“Windfarm” an example of flat origami tessellation. It is folded from one sheet of paper though, slits are made to facilitate the folding process. Cutting a large sheet of paper to get smaller but still connected sections is called sub-dividing and it is used in Senzaburu Orikata, the first published origami instructions. (Note that “Rokoan” is a branch of origami where a large sheet is subdivided and each subdivision is folded into a crane. This creates a series of interconnected cranes.)

“Stargate” is an example of a macro-modular sculptures. It is a ring made with 5 Artifacts and 5 joining pieces. Note the size of Artifact adjacent to Stargate.

Although Complete Origami by David Mitchell is not complete, it is still a very comprehensive and satisfying origami book. I recommend this book for people who want to go beyond birds, frogs, and boats. The reader will increase their skill level with the crease-and-collapse designs, tessellations, and curved paper. Mitchell is very knowledgeable and imparts a wealth of information regarding origami and mathematics.