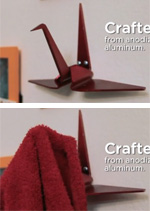 Dec, 2012:
Check out this Origami Crane Hook. It is a utility hook for hanging your jacket, hat, or purse. It is sturdy enough that you can hang a coil of extension cord or a heavy backpack. You can install it in your hallway, in a bedroom, in the garage or in your backyard. It’s useful, it’s artistic; it’s a KickStarter Project. You’ll be glad to know that David Kishiyama has reached his goal of $2500 so now he can make his Origami Crane Hook project can take flight.

Walt Disney Animation Studios released a delightful short film called Paperman. It is the fabulous work of Walt Disney without the crazy, supercharged cartoons you see in today’s movies. In Paperman, an unassuming young man meets a lady with the help of paper airplanes. This 2012 short film won the Academy Award for Best Animated Short Film and the Annie Award for Best Animated Short Subject.

Oct, 2012:
One of the great aspects of Golden Venture Folding is that they are like lego bricks: you can pretty much make anything if you have enough pieces.

Russian school teacher, Sergei Tarasov, demonstrates this by constructing modular-origami cathedrals using the inconspicuous triangular units made of paper. Some of his constructs require 60,000 units and take 6 to 12 months to complete. Read more here.

Sept, 2012:
A different kind of “news”: a man pays his traffic ticket with 137 dollar bills that are folded into origami pigs. Not only that, he delivered them in Dunkin Donut boxes.

Although the police officers were not terribly offended, they did ask him to unfold the bills before they accepted the payment. The officer advised, “put the creativity into something more useful.” See photos and videos.

Aug, 2012::
Boon, Ronald Koh, and Francis Ow teamed up together to create “Peace, Love and Hope.” It is an exquisite trio of origami models photographed by Chloe Cheng. See larger photos here. 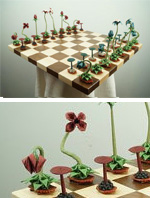 July, 2012:
I’ve encountered a few origami chess sets in my time, but this one is one of the most creative and unique ones I’ve seen. Benjamin John Coleman created this chess set in a period of one month. The pieces are origami flowers made from recycled paper. If you love it, you can buy it for $1250 from his etsy store. More photos in his facebook page and his website.

June, 2012:
This July, we are sadden to hear the passing of origami artist, Rick Beech. Rick, “Mr Origami”, did more than just fold paper; he published origami books, he was an exceptional origami teacher, he did shows with origami, and he traveled the world for origami. It is almost like he imbibed and exuded origami. Rick was both charming and volatile; he was like a magnet that can attract and repel. We will miss him dearly. Read more from BOS. Photo from papierfalten.de 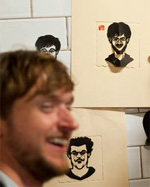 May 15, 2012:
Ming Liang Lu does a lot of things including calligraphy, sculpturing, engraving, and cut paper. His works have been displayed as temporary exhibits and as permanent installations.

Despite the acclaim and awards, Ming likes to show off his skills to everyday people. In May, 2012, he captivated New Yorkers by setting up a stand in the Union Square subway platform and cutting black origami paper into intricate silhouette faces. And it only takes 5 minutes. See video; photo from here. 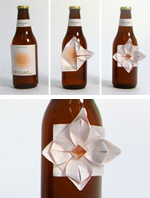 May, 2012:
“Origami Lager” may have been around since 2006, but I only discovered it May, 2012. Developed by industrial designer Clara Lindsten, the label on this beer bottle can be folded into an origami water lily. So instead of peeling the the label off a beer bottle, you can now elegantly fold it into a flower.

March 26, 2012:
March marks an exciting month for origami enthusiasts. Not only is origami featured in the Google Doodle, it is also on the front page of Time Magazine (March 26, 2012 issue).

Here, a stylized, dollar-bill-origami lady is shown with the title “The Richer $ex. Women are overtaking men as America’s breadwinners. Why that’s good for everyone.”

March 14, 2012:
The origami community was extremely excited this day because the Google Doodle featured origami! It was in fact, in honor of Akira Yoshizawa’s 101st birthday. Yoshizawa is considered the father of modern origami and creator of wet folding.
The letters in the word Google are each made from a single sheet of paper. You can try folding them from a crease pattern here. The butterflies are one of Yoshizawa’s earliest designs. The Google Doodle was made possible through the efforts of Robert Lang. 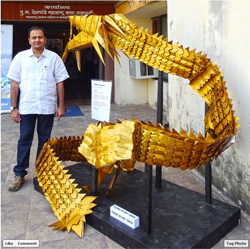 Feb, 2012:
Himanshu Agrawal was invited to fold a large (25 feet long) Origami Dragon to commemorate 60 years of India-Japan relations. The dragon had over 3200 scales and it was created after 78 hours of folding. Great job! Jan, 2012 is also the beginning of the year if the dragon too. 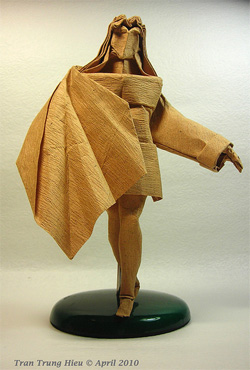 Jan, 2012:
What a wonderful treat to discover the work of Tran Trung Heiu (aka Adam Tran). His flickr site is filled with wonderful origami, noteworthy are his human figures which are shapely and well proportioned. This particular origami model is called “Emma – Fashion Model”.