The Story of Sadako 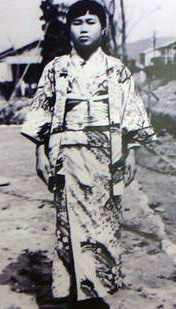 Sadako Sasaki was a Japanese girl living in Hiroshima when the atomic bomb was dropped on Japan (August 6, 1945). In 1955, at age 11, Sadako was diagnosed with leukemia, a type of cancer caused by the atomic bomb. [Photo from wikipedia.com]

While in the hospital, Sadako started to fold paper cranes. In Japan, there is a belief that if you folded 1000 paper cranes, then your wish would come true. Sadako spend 14 months in the hospital, folding paper cranes with whatever paper she could get. Paper was scarce so she used the paper from medicine bottles, candy wrappers, and left over gift wrap paper. Her wish was that she would get well again, and to attain peace & healing to the victims of the world. 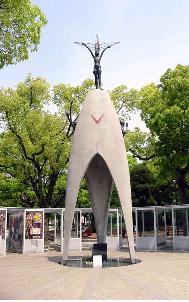 Sadako died on October 25, 1955, she was 12 years old and had folded over 1300 paper cranes. Sadako’s friends and classmates raised money to build a memorial in honor of Sadako and other atomic bomb victims. The Hiroshima Peace Memorial was completed in 1958 and has a statue of Sadako holding a golden crane. At the base is a plaque that says:
This is our cry.
This is our prayer.
Peace in the world.
[Photo by Robert Atendido]

Although Sadako died at a very young age, her legacy continues. To this day, the paper crane is probably the most recognized origami model. The paper crane is often given as a wish for peace.

Sadako’s brother (Masahiro Sasaki), who is now over 70 years old, saved five of the original paper cranes folded by his sister when she was in the hospital. He hopes to donate the remaining 5 cranes to the the five continents of the world. 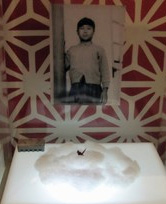 Sept 22, 2012: One of the original paper cranes folded by Sadako was donated to the USS Arizona Memorial in Hawaii. It is hoped “that Japan and the United States can overcome resentment and animosity over the war and strengthen their relationship.” See article.

Sept 13, 2009: One of the original paper cranes folded by Sadako was given as a gift to the Tribute WTC Visitor Center in New York City. It is hoped that the fingernail-sized crane will remind us of a little girl’s wish for world peace. Masahiro says, “people from all over the world will see the crane that Sadako folded, and will desire peace.” See article.

1990: In Seattle, Washington, USA, Nobel Peace Prize nominee, Dr. Floyd Schmoe, built a life-size statue of Sadako. The statue was unveiled on August 6, 1990, 45 years after the bombing of Hiroshima. The statue is in the Seattle Peace Park and often has paper cranes draped over it. [Photo from wikipedia.com] Unfortunately, not everyone is at peace; the statue was vandalized in 2003 and again in 2012. The statue has been repaired.