Magicians, conjurors, and performers have used origami and paper magic to astonish their audiences for ages. A pre-creased paper appears to be a plain, flat sheet of paper. But, in a few quick moves, the magician transforms the paper into a 3 dimensional structure. Indeed, it has been suggested by David Lister and others that the flapping bird was invented this way: a traveling magician forgot how to fold a paper crane and made the flapping bird instead. [Photo: Brian Cox demonstrates troublewit]. 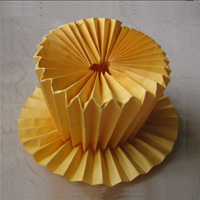 There is a type of magic called Troublewit which is based on origami folds. In troublewit, a piece of stiff paper is pleated repeatedly, accordian-style. As well, internal creases are made, at an angle, in between the pleats. The pleats allow the paper to be compressed into a relatively small size while the internal creases allow the paper to be opened into a surprising variety of shapes. [Photo: troublewit hat by geoorigami.]

Troublewit is usually performed with a story. At the appropriate moment of the story, the pleated troublewit prop is transformed into different shapes. Most audiences are familiar enough with paper that they do not percieve troublewit as the same kind of magic as, for example, sawing a person in half. Nevertheless, with an experienced performer and proper lighting, troublewit can be entertaining and quite stunning. [Photo: troublewit props from JCRMagic.com.]

Typically, each troublewit prop can be manipulated into 3 or 4 shapes. But, you can buy (or make) different troublewits where the internal creases are placed differently: these would produce different shapes. Common shapes are fans, lanterns, hats, bowls, dumbells, vases, candles, cakes, and so forth. [Photo from “The Universal Self Instructor” in A Jonze‘s flickr site.]

It is not clear who or where troublewit was invented, but it has been suggested that troublewit was known as early as 1710 (Complete Origami) and perhaps as early as 1676. The craft was popularized by Harry Houdini and today, performers still use troublewit as demonstrated by the sale of troublewit props and books. [Image from JCRMagic.com.]

Read More About Troublewit From:

There are other origami models which are noteworthy. Some of these are interesting in a private sort of way while others can dazzle an audience.

There are many other magic tricks that involve paper and cards. Some of them involve tearing a piece of paper into bits and then having them magically reassemble themselves. Other tricks involve having the paper attached to a thin (invisible) string. The magicain then covertly maneuvers the string to make the paper appear to float in midair.

The following videos are fun to watch and if you watch carefuly, the secret is revealled. There are many origami paper magic books

that are good for young magician.

Magicians who do Origami

Books about Paper Magic and Troublewit