Paper airplanes are something every schoolboy knew how to fold. These boys grow up but never leave their childhood hobby and this leads to a generation of engineers who are still dedicated to making the fastest, biggest, and longest flying paper airplanes!

Biggest
March 2012: Pima Air & Space Museum launched a giant paper airplane (possibly the largest paper airplane ever made) across the Arizona Desert. The airplane was 45 feet in length and weighed 800 pounds.

The airplane was built by Art Thompson and it was modeled after the paper airplane created by 12-year-old Arturo Valdenegro. It is hoped that the project would encourage children to pursue careers in aviation and engineering. Photo from articles.latimes.com. 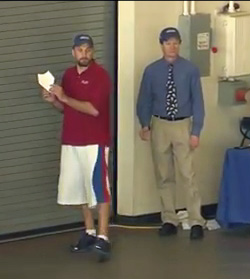 Longest Distance Flown
Feb, 2012: A new Guinness World Record has been made for the longest distance traveled by a paper airplane! Joe Ayoob (former American football quarterback) and John Collins (paper airplane designer) managed to fly the paper airplane for a distance of 69.14 meters (226 feet, 10 inches).

John Collins has been folding, designing, and flying paper airplanes for over 40 years. He has been trying to beat the previous long-distance record for the last four years. Collins says that “it’s the most technical plane I’ve ever made” and that “science is incredibly important”. Read details here. Watch video, or watch interview.

Longest Flight Time
2009: Takuo Toda, (engineer and chairman of Japan Origami Airplane Association) set a new Guinness World Record by having his paper airplane stay afloat for 27.9 seconds. The airplane was made from one sheet of paper with no cuts. See video here.

The previous world record for the longest flight was held by Ken Blackburn in 1998: his paper airplane was afloat for 27.6 seconds. Only 0.3 seconds difference – that’s close, very close!
Watch video. 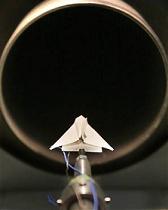 Paper Airplanes in Space
It’s not just fun and games. Japanese scientists hope to launch paper airplanes from the International Space Station. The chemically treated paper airplanes have been tested in a hypersonic wind tunnel and they have survived Mach 7 speeds and over 400 degrees Fahrenheit. Approximately 30 airplanes, each less than 3 inches long, will travel through space and enter the Earth’s atmosphere and probably land in the oceans. There is no tracking, guidance, or retrieval system. If the paper airplanes survive reentry, it is up to everyday people, like you, to retrieve & return the airplanes to the scientists. Instructions are printed on the airplanes in 10 different languages. See more photos of the airplanes here. 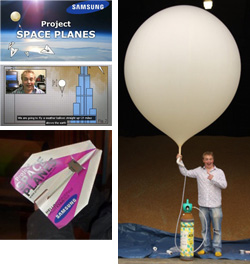 Paper Airplanes at the Edge of Space
Jan, 2011: Not a rocket scientists? Not a problem. Paper airplane enthusiast, Joel Veitch, flew a weather balloon up for over 20 miles. When the weather balloon burst, 200 paper airplanes were launched from the edge of space. Each plane carried an uploaded message (provided by the general public) on a Samsung memory card.

Although “Project Space Planes” started in Germany, the paper planes have been found in countries as far as Australia, Russia, India, USA, Canada, and South Africa! If you happen to find one of these pink and purple paper planes, send Joel a message because he hopes to set the world record for the furthest paper airplane flight EVER! See details here or watch video. 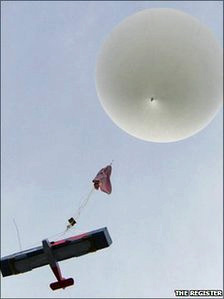 Another Air Ballon Launch of Paper Airplanes
Not so fast, Joel!
Just 2 months earlier, in Nov 2010, British space enthusiasts (Steve Daniels, John Oates and Lester Haines) launched one paper airplane from space, also using a helium balloon. Their project, called “PARIS” (Paper Aircraft Released Into Space), launched one paper airplane and not a flotilla of airplanes. The one airplane (named Vulture) had a 3-foot wingspan and was made of paper straws. It was launched while over Spain, and was successfully retrieved just 100 miles from the release point. Read full story here. Watch video. Photo from here.

Powerup with Electricity!
If you don’t have access to the International Space Station or to a weather balloon, you can still make your airplane soar like never before: you can buy a Powerup kit which will convert your traditional paper airplane into a free flight electric airplane. Electric Conversion Kit available from amazon.com for $20.

Or…. you can get this DIY paper plane launcher which will propel your paper airplane through the air at 30 mph! Not bad for $10. Electric Paper Plane Launcher also available from amazon.com.

In 2014, Shai Goitein who created the original Powerup Kit has put into production his new & improved design: a smartphone-controlled electric paper airplane. PowerUp 3.0 will change your “embarrassing paper airplane into a lean, mean, flying machine”. It’s not available on amazon yet, but you can read all about it at the kickStarter web site. 2015 ushered in further developments: you can attach a camera to the paper airplane and get live-video streaming. it’s like a paper airplane drone.

Who would have ever thought that the paper airplane would go so far!

DIY Perpetual Paper Airplane
So, let’s say you’re a frugal, homey type and you don’t want to spend any money nor do you want to go to an art gallery. How could you make your paper airplane fly forever without even going outside? Here’s the perfect solution for you: ViralVideoLab has figured out how to make a paper airplane fly indefinitely with a kitchen stove. The paper airplane go around in circles – kind of dizzying, actually. See it here. If you prefer, you can have your airplane fly forever in vertical rotation with a hairdryer. See it here. Talk about DIY!
Paper Airplanes in Art Installations
Amazon.com is not the first to give us motorized launchers. In 2008, Nova Jiang had an interactive art installation where participants fold their own paper airplane, launch it with a motorized launcher, and hope that the plane passes through the snipping scissors and land within the netting. “Hull Loss” and Jiang’s other artwork allow the audience to become performers. See The Flytrap/Hull Loss by Nova Jiang.

If you love paper airplanes then you will enjoy this art installation composed of many paper airplanes shooting out from a single source. In 2009, artist Dawn Ng, created “i fly like paper”. See larger photos here

Innovated DIY Contraptions
Auto folder: Look at all those paper airplanes! Wouldn’t it be great if there was a machine that can fold paper airplanes for you? Well, there is. In 2008, Balkcom & Mason invented the first origami-folding robot. Watch video or read article. This machine could fold a paper airplane, a samurai helmet, and a paper cup. 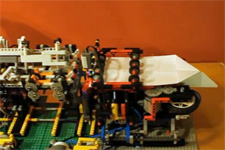 Auto Fold and Launch: But don’t be intimidated by the above state-of-the-art technology. In 2013, Hknssn made a paper-folding machine using Lego bricks. It could fold and launch a paper airplane. See it here. Admittedly, the Lego machine is more of a mechanical feat whereas the above robot is a computational feat.

So, why is it that a 5-year-old can fold a decent paper airplane but it takes a big, complicated machine to do the same task? The answer lies in dexterity, sensitivity, and judgment. Humans can manipulate soft and flexible objects and decide where to make folds on the fly (excuse the pun). Machines can’t see nor feel and they can’t cope with non-rigid materials. Paper and fabrics are too floppy and behave in an unpredictable manner.

Photocopier-sized: Here’s another paper airplane folding machine. This one is a little more high-tech than the lego one, but it’s not as clunky as the origami robot by Balkcom & Mason. This machine is more like a photocopier: wish I had one of these in my office!

Since you’ve read this far, might as well see this paper airplane folding machine made from parts of a bicycle. The ambition involved is like that of going to the moon! 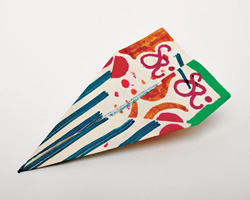 Paper Airplane Collector
1961 to 1983: Without a doubt, people are fascinated by paper airplanes and much of our pastime is devoted to making and flying the paper creations. But, painter, filmmaker, and collector, Harry Everett Smith shows his interest in a different way. He spent years (1961 and 1983) collecting stray paper airplanes in and around New York city. His planes are a visual timeline of paper folding styles and the actual papers themselves. You can see a tiny sampling of his paper airplane collection here.

Paper airplanes are a classic example of origami in action. They are easy to fold, fun to fly and people can’t resist launching them. Did you know that in the USA, there is a day devoted to paper airplanes? May 26 is the unofficial National Paper Airplane day, a day where friends get together and fly paper airplanes. But you don’t have to wait for May 26 to fold a piece of paper – learn to fold a paper airplane today!