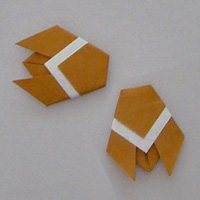 The traditional origami cicada is highly stylized which is to say, you have to “believe” and “imagine” that it is a cicada. Nevertheless, this paper cicada has been around for a long time and it has been made and enjoyed by countless children. Here’s how to make one:

Start with a square sheet of paper with the colored side facing down. 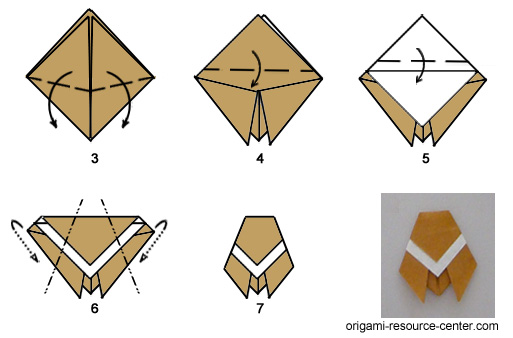 Here is more information about the amazing cicadas.

People often think cicadas as a type of cricket (because of the noise they make), or as a type of locust (because they come in droves). In reality, cicadas are not related to crickets or locust, but are a separate species of their own.

Cicadas are fairly large: about 1 to 2 inches long (2 to 5 cm). The largest cicada is the Empress Cicada which can grow to 2.8 inches with a 7 to 8 inch wingspan. Cicadas spend most of their young life underground and come up only in their last stages of development. In the middle or late summer, the nymphs emerge from the ground and climb onto trees and bushes. Here they molt and emerge as adult cicadas. The exoskeleton shell remains attached to the tree trunk while the cicada flies away.

Once out, the male insects begin to call for mates by contracting and relaxing special muscles in the noise-making structures called “tymbals”. Both make and females have the tymbals but only the males use them to make noise. It is interesting that in North America, the sounds made by cicadas are referred to as “noise” whereas in Japan, the sound is called a “voice”.

There are probably over 1000 species of cicadas living in all continents except for Antarctica (too cold). Some species have a one-year life-cycle while others have been known to live many years underground and emerge once every 13 or 17 years. After they emerge, the insects mate, lay eggs, and then die within a week or two. When the eggs hatch, the nymphs fall to the floor and tunnel into the ground to continue their life underground until it is time for them to emerge again.

Cicadas emerge all at the same time, in a great swarm. Biologists believe that this is a survival strategy: there are so many of them at once, their numbers far exceed the appetites of the existing predators so a good proportion of the insects can mate and reproduce. For those who like math, it is interesting that some cicadas have 13 or 17 year life-cycles: 13 and 17 are prime numbers. If the cicadas had a 12 year life cycle, there would be more chances that a predator had a synchronized (2, 3, 4, or 6 years) life-cycle. More here.

In days of old, Japanese children collect cicadas in the summer for fun. The exoskeleton shells are also collected: these are easy to find because they remain attached to the tree trunk. As such, in Japan, cicadas symbolize summer. Some species of cicadas emerge in late summer so cicadas can also symbolize the end of summer or the passage of time. It’s no wonder why the Japanese immortalized the insect in the form of an origami cicada.

This web site has many cicada voices found in Japan. Exoskeleton photo from here.