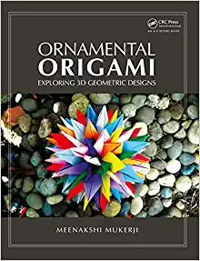 Ornamental Origami is Meenakshi Mukerji’s second book on modular origami. Those of you who are familiar with her first book will find that this second installment to be just as well organized with a slew of new origami models.
This book has 40 origami models divided into 6 sections. The individual units are easy to fold often requiring only mountain and valley folds. Instructions are in the form of line drawings with the “dash-dash-dash” or “dash-dot-dash” notion that is typical of modern origami books.

Assembly of the units into the finished model does not require glue or tape; however the use of clips and pinchers to hold things together is highly recommended (and in some cases required). Some models can be made with 1, 3, 6, 12, 30 or more units. Thus the 40 models presented in the book can quickly become more if you attempt all possible assemblies. Finished models are shown in color photos though not all possible variations are shown.

Section 1: Modular Origami Basics
Section 1 of Ornamental Origami is devoted to preliminaries such as origami tips, tools, symbols, and bases. There is a introduction of Platonic and Archimedian solids.
Section 2: Windmill Base Models
The origami models in this section rely on the windmill base. The units are easy to fold. Assembly is not hard though you need to be diligent and keep track of which flaps go into which pockets.

Sunburst, Starburst, and Ixora are variations of one another. They can be assembled with 3 units or 6 units (shown).

Tuberose and Oleander have locks which give the final model extra detailing. Tuberose starts with a square sheet of paper and therefore has the appearance of 4 petals. Oleander starts with a pentagonal sheet of paper which then leads to a model looking like a 5-petaled flower. These models can be stand-alone (1 unit) or be assembled into a 12-unit ball.

Section 3: Blintz Base Bouquets
The models in this section of Ornamental Origami is based on the blintz fold. These models are easy to fold and easy to assemble though you need to use clips during assembly to keep the units together. Once the last unit is added, the clips can be removed and the model will be able to stay together without glue or tape.

As often the case with versatile modular units, these units can be assembled into origami models with 3, 6, 12 or 30 units. Shown below is the Basic Model made with:

The models in this section are very satisfying to complete: the units are easy to fold, assembly is relatively easy when aided by paper clips. There are many variations of the Basic Model and they include: 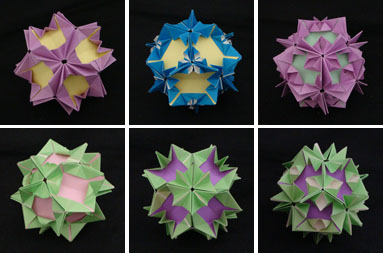 Section 4 of Ornamental Origami is all about decorative icosahedra: Patterned Icosahedron (left) is your basic icosahedron with 20 triangular faces: a shape common in modular origami.

However, the other 4 icosahedra in this section are quite spectacular: extra sheets of paper (inserts) are used to form decorative swirls and pockets. Shown below are Icosahedra with:

These latter models use 30 sheets of rectangular paper to make the icosahedron plus 30 to 60 inserts to make the decorative swirls and pockets. Units are very easy to fold and assembly of the units can be done without use of glue but clips are required to keep pieces in place during assembly.

The models in this section of Ornamental Origami are created from rectangular sheets of paper which are folded so that they have extra flaps. The flaps are then folded back or curled to form decorative details. The models presented here can be made with 12 or 30 units. It is likely that other models made with more or less units are possible.

The first model is perhaps the least exciting: here an extra flap is folded back to form “fins”. On the other hand, Zinnia is the most involved model in this section. Here the flaps are pried open to form decorative pockets.

In Dahlia and Geranium, the extra flaps are twirled to form petal-like curls. The rectangle used to make the Dahlia unit is shorter compared to that of the Geranium unit, thus the curls in Dahlia are tighter.

Flowered Sonobe is fun to fold and to hold: an extra sheet of paper (insert) is used to give the units 3 colors. Some of the layers of paper can be pried away from the model causing it to “bloom”.

These floral balls all use 30 units to complete: assembly of the units is easy and the locks are secure. When you do not have duo color paper, Mukerji offers advice on how to use “inserts” of different color so you can achieve beautiful floral balls of any color you choose.

The remaining 5 models in this section are all folded in a similar manner with slight variations on the same theme.

Interestingly, Daisy is folded in the same way as Layered Poinsettia but with some of the folds reversed so the extra paper shows itself as a color change in the center of the floral ball.

The units for these planar models are easy to fold but assembly takes a bit of attention. In the photos below, the models each used 30 units to complete. They are photographed so at the center, you can see 5 units coming together to form a pentagon.

However if you look at the white units, you will see that the units all lie within one plane (like a CD disc). In fact, the 30 units are assembled so there are 6 intersecting plane; each plane is made of 5 units of the same color and thus the name “Planar Models”.

As with the rest of Ornamental Origami, the diagrams are clear and easy to understand. Many of the diagrams are available on the internet. The strength in this section of the book is in the historical and mathematical analysis of the models. Mukerji does an excellent job in describing how these models are designed so that you can design your own models. In the photos above, the diagram for UVWXYZ Rectangulars is provided but “Stars” and “Pentagons” is not given: those were re-created by myself (if I can do it, anyone else can too!)

The diagrams provided are for:

Photos not shown since they are very similar to the ones shown above except they are made with more units.

Summary
All in all, Ornamental Origami is a very satisfying modular origami book suitable for those who love “spikey balls” and “floral balls”. Not recommended for beginner origami enthusiasts and for the most part, not really suitable for children unless you are willing to offer a lot of help.
Copyright 2022, origami-resource-center.com   fb