Marvelous Modular Origami by Meenakshi Mukerji is a wonderful book for those who are interested in modular origami (also called “unit origami”). Similar to Mukerji’s web site, this book is filled with vibrant polyhedra, balls, and floral shapes. A pleasure to see though some are a challenge to fold.

This book is 75 pages in length and has instructions for 30 origami units. A typical feature of modular origami is that the units can be assembled in different ways; thus, the 30 origami units shown in this book can produce more than 30 origami models.

Daisy Sonobe. When assembled, units form a white (back side of origami paper) pinwheel pattern, or a daisy pattern.

Snow-Capped Sonobe 1: When assembled, the white parts of the paper converge at the corner giving the appearance of snow at the peak of mountains.

Swan Sonobe: this unit is so named because the assembled models have a pattern which looks like the head and neck of an origami bird.

It should be noted that the units above can be assembled into many forms including a 12-unit cube, a 30-unit stellated icosahedron, a 60-unit spiked pentakis dodecahedron, a 90-unit dodecahedral model, and even larger assemblies.

Section 2: Enhanced Sonobes
This section uses enhanced Sonobe units (or eSonobes units). These are folded like the Sonobe units except that a rectangular sheet of paper is used instead of a square. The “extra” length of paper beyond the square shape is used to form curls and whorls. The photos below were made with 30 units though, as above, different number of units can be used to form various shapes. 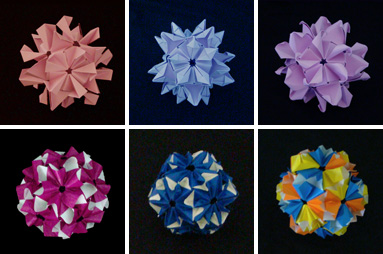 Section 3: Floral Balls
This section of Marvelous Modular Origami produces some of the prettiest models in the book. The units are easy to fold and assembly of the model is obvious. All units are folded in a similar manner with variations on the size of the paper, the angle of the petal tip, and the use of hidden or visible locks.
Poinsettia Floral Ball  Primrose Floral Ball  Passion Flower 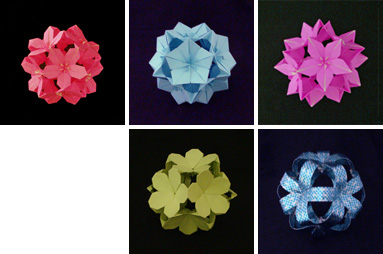 hidden locks:        Plumeria Floral Ball   Petunia Floral Ball
Section 4 & 5: Patterned Dodecahedra
Origami dodecahedra are notoriously difficult to build and the ones shown here are no different. The units must be folded with accuracy otherwise the resulting pentagonal faces are lopsided or uneven. Assembly the units often require agile fingers to secure small or hidden locks. All in all, construction of origami dodecahedra are for the dedicated enthusiast.

In this book, Mukerji offers instructions to 10 origami dodecahedra: each more fantastical with increasing swirls and layers. Although the units are not terribly difficult to fold, they do require detailed attention and are un-forgiving. Some of the units are made from a template while others require cutting to create locks. 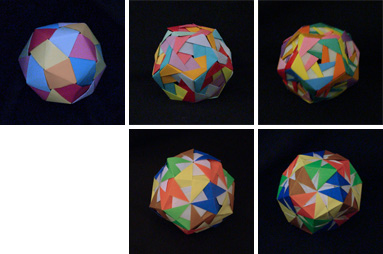 Section 6: Miscellaneous
Last but not least, section 6 of Marvelous Modular Origami offers 3 miscellaneous models to complete the set of 30. Lightning Bolt (starts with A6 paper) and Star Window are Sonobe-like models but have openings. Twirl Octahedron is a composite model using two different types of units.

Marvelous Modular Origami has many models which will keep you busy for days. The floral balls in section 3 are most satisfying: they are easy to construct and look phenomenal. The dodecahedra are challenging and would be appreciated by the tenacious and dedicated paper folders. Mukerji’s variations on the Sonobe unit will inspire you to create with your own designs.

If you love this book, be sure to check Meenakshi Mukerji’s next 2 books:
Ornamental Origami    and   Origami Inspirations
Which of her 3 books is the best? Mukerji says that choosing a favorite book is like choosing a favorite child: each has its own strengths and beauty.