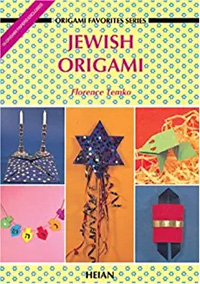 Jewish Origami by Florence Temko is a small book (12 pages) featuring origami models which can be used to represent elements of the Jewish faith. Characteristic of Florence Temko’s publication, this book has clear, easy-to-follow instructions for simple origami models.

Eight origami models in this book can be used to enhance bible stories and Jewish holidays.

Grogger: In the Book of Esther, it is told how Haman wanted to destroy the Jews. His evil deed was foiled by Queen Esther. The Jewish people celebrate this intervention in the holiday Purim. During this holiday, people will make a sharp noise when the name Haman is mentioned. This demonstrates their contempt for Haman and an attempt to block him out.

Florence Temko offers a way to make a simple grogger from paper. This two-step origami model can make more or less noise depending on the type of paper used.

Shofar is a hollow horn of an animal – typically, the horn of a ram. During religious holidays such as Rosh Hashanah and Yom Kippur, the horn is blown and the sound signifies the beginning / end of religious events.


In less than 10 steps, you can make a paper shofar suitable for home decorations and greeting cards. 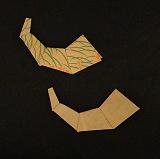 This paper craft begins with a triangular piece of paper and produces a six-pointed star with interlocking sections. Temko suggests ways in which the star can be used as earrings or as a pendant on a necklace.

Matzoh Cover: After the Ten Plagues, the Pharaoh of Egypt agreed to release the Israelites. In their race to leave Egypt and slavery, the Jewish people did not have time to wait for bread to rise before baking it. The bread made for their journey was unleavened. During Passover celebrations, Jewish people eat matzoh (flat, unleavened bread made with flour and water only) to commemorate the Exodus from Egypt. 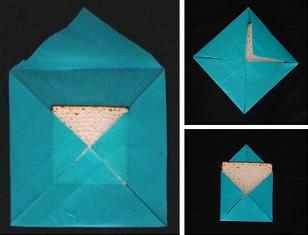 This simple origami fold can be used as a matzoh cover. If you begin with a very large sheet of paper, then you can make a cover with 3 compartments suitable for 3 pieces of matzoh. Fabric is a good alternative to paper.

Torah is the first 5 books of the Bible. A Torah scroll is a copy of the Torah written in a formal and traditional manner by specially trained scribes. Every synagogue has a Torah scroll which is unrolled and read during religious services.

Though unique compared to the other origami models in this book, this Torah scroll is easy to make. You will need a sheet of duo-color paper that is 1:2 in proportions. 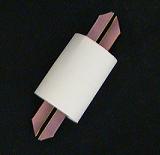 Dreidel: During Hanukkah, children play a game with a 4-sided spinning-top called a dreidel. The sides are inscribed with the Hebrew letters: Nun, Gimel, Hei, or Shin. Together, the letters can represent the statement “a great miracle happened here”. Depending on which letter is face-up after a spin, the player can:
– do nothing (Nun),
– take all the money (Gimel),
– take half the money (Hei),
– or give money into the pot (Shim).
You can make paper dreidels which are great as decoration or elements of a greeting card.

Regardless of interpretation, you can make this origami long-coat out of colorful paper in less than 10 steps. 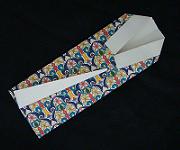