Exquisite Modular Origami is the fourth origami book by Meenakshi Mukerji. Those of you who are famliar with her work will be glad to hear that this installment is just as good as her first 3 books. 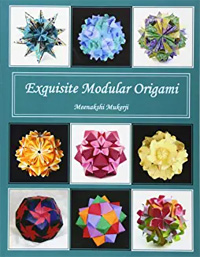 Exquisite Modular Origami is 67 pages long with the first 14 pages devoted to introductions, basic folds, tips, and polyhedra facts. The book gives instructions on how to fold 20 origami models but some are variations on the same theme. Two of the models are created by guest folders Maria Sinayskaya and Ekaterina Lukasheva. The remaining models are all created by Meenakshi Mukerji.
The cover of the book has color photos of 15 completed origami projects. Inside the book, there are more photos of completed models, however they are in black and white only. The diagram instructions are clear and easy to follow. Assembly of the individual units into the final model is briefly described: you should already have experience in assembling 30-unit origami models.

A word about glue: the models in Exquisite Modular Origami do not require glue: pockets, tabs and locks help keep the units together without the use of adhesives. However, for this web site, glue was used because the models were later donated to rambunctious, school-aged children.

Exquisite Modular Origami starts with the “Super Simple Isosceles Triangle Unit”. As its name implies, the unit is easy to fold. It is a versatile unit which can be used to form various polyhedra using various numbers of units. Show above is:
A. Stellated Octahedron (12 units)
B. Stellated Cuboctahedron (24 units)
C. Greater Stellated Dodecahedron (30 units)

The next model is called “Compound of Five Octahedron”. At first, it seems like an odd name; however, it is an apt name. If you look at the model carefully, you will see a repeating pattern of 5 octahedra. These appear to be compressed into one another so only the tips are visible. Note in the photo the lime-green units: you can see 5 units which are positioned so they look like they are part of a larger, gem-like structure. All of the units are arranged by color so they look like 5 octahedra.

Next is a series of related models. Each one uses 30 units and they are all assembled in a similar fashion.

A. The first is “Daffodils”. This is a delightful model with
curled edges and a protruding center.

B. The next model is “Dimpled Model with Curls”: it is similar to Daffodils
except the center sinks inwards instead of out.

C. The third is “Dimpled Model with Curves”: this one is similar to the one
above except that the curls are folded back and pulled out to give
extreme curves, almost like scoops.

D. Next is “Dimpled Model with Flowers”: here, the curls are pried open to
reveal the white (back) side of the paper. The color change makes it
seem like petals.

E. The fifth variation is “Dimpled Model with Color Change”: the units are
folded so the color alternates from front side (colored) to back side
(white) of the paper. The color change is very stunning.

Next on the agenda are 4 dodecahedra. If you have never made a modular origami dodecahedra, be warned. These models are highly regular so inconsistencies in paper size and folding accuracy will result in warped shapes which do not meet cleanly at the edges and corners. Shown below are:

The next few models are a combination of flowers (round and ball-like) and stars (spikey).

The “Star Flower” series all start with paper that is of size ratio 1:2. Both the front side and back side of the paper are visible in the completed model. The color change makes a prominent center. Shown below are:

The “Zinnia” series are beautiful models with layers of paper which are pried apart to give the appearance of two petals. The units are somewhat difficult to make because you need to tuck-in layers of paper into difficult to reach places. Narrow tools such as skewers or knitting needles are helpful. Zinnia is the only model in this book which has been previously published in Ornamental Origami. Shown below is:

Along the same lines is the “Corolla” series. These units have four petals instead of the two in Zinnia. A longer sheet of paper is needed to form the units because some of the paper is used to make the petals. Corolla uses a paper of size ratio 1:2 and Corolla Star uses paper of ration 2:5. Care should be taken when preparing the paper because inaccuracies in cutting or folding will give poor results. Corolla is probably the most difficult and least forgiving origami model in Exquisite Modular Origami. Shown below is:

Last but not least are two models by guest authors.

Etna Kusudama was created by Maria Sinayskaya. It is a delightful model which has holes or windows. The units are easy to fold and assembly is comparatively easy and pleasant. It can be made with 12, 24 or 30 units. Shown is Etna Kusudama made with:

Helica Kusudama is created by Ekaterina Lukasheva. When assembled, the model is a geometric icosahedron. But, if you peel back some of the layers of paper, the model is transformed into a swirly ball.

In summary, Exquisite Modular Origami has numerous origami models which will keep you busy for hours, days, and weeks. The book is intended for people who have had experience in modular origami. It is not recommended for beginners.

Despite its title, this book is not any more “exquisite” than the other 3 modular origami books written by Meenakshi Mukerj. The models in this book are just as nice as the models in her other books – it is more of the same good material which we have learned to love and appreciate.