As we say good by to 2011, our thoughts sail towards 2012 with the discovery of these fabulous floating candles made in the shape of classic, origami sailboats (popularized by Curious George

storybooks). Designed by Roman Ficek, the candles come in 7 pastel colors and can burn up to 2 hours. Candle Design had dreamed of creating quality candles back in 2007 but it was not until 2011 that the company was established. Floating candles in the shape of sailboats, how clever is that?

We end the 2011 year with sad news: our very dear David Petty has passed away. To the general public, he is probably best known for his web site which contains the largest collection of traditional origami models. You may also know David from his published origami books and booklets

. But, those who know David personally will tell you that the man is much more than his work. See tribute to David Petty by Nick Robinson.

November, 2011:
Just in time for the holidays, these Ribbon Animals are the ultimate in strip folding. Japanese illustrator and artist, Baku Maeda, create animals by twisting and bending ribbons to capture their essence. His world of Ribbonesia is filled with life and joy. 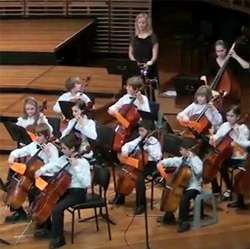 This year, the Pacific Coast Origami Convention was held in Seattle. Along with some great and amazing origami, conference goers were treated with dinner-time entertainment. Local school children played “Ear-igami” by Richard Meyer. This compositional piece incorporates paper in the making of music.
The Seattle performance can be seen here, or you can see another rendition of the same song here. 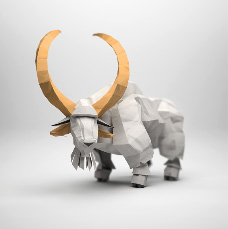 September through November, Jeremy Kool sells unique, fine-art prints which show origami-like animals. However, are they really origami or not? The answer is no, they are not origami. The images are digital 3D illustrations made to look like papercraft. Still, very nice and quite convincing. Proceeds will go to Jeremy’s “The Paper Fox” project which is an interactive story designed for iPad/Android. 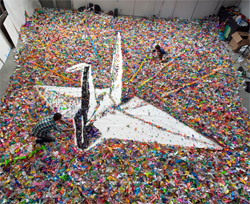 The nonprofit Bezos Family Foundation invited children to send paper cranes which would generate a $2 donation per crane delivered. The monies would be dedicated to rebuilding and reconstructing the damage due by the March 2011 earthquake in Sendai, Japan. The foundation received over 2 million cranes which came to about $500,000. Some of the paper cranes were made into a 36′ x 40′ mosaic by Booklyn-based, Brazilian artist Vik Muiz. First seen here.

Su Blackwell does amazing work with paper: although it is not origami, it is definitely kirigami and paper sculpture. Among other things, she uses books and cuts scenes directly out from the pages of the book. Her work is wonderful and indescribable – you must see it for yourself to understand it. Shown on right is “The Baron in the Trees”. View Su’s intricate projects in her web site. 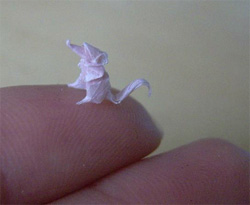 Anja Markiewicz makes tiny origami models using sheets of paper that are less than 1″ square. Although she has obviously done origami for many years, her nano-origami has recently gained exposure through the internet. See more in her flickr site. 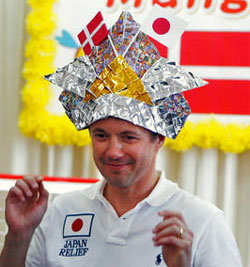 In Mid June, 2011, the Danish Crown Prince Frederik visited the Akai Minami Nursery School (Higashimatsushima, Miyagi Prefecture) where the children presented him with an origami helmet. He was the first nobility to visit northeast Japan after the quake. Among other things, the Prince donated 22 million yen for relief efforts. Read article. 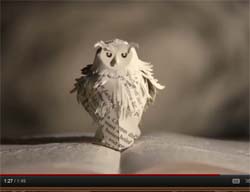 In June 1, 2011, JK Rowling of the Harry Potter series announces the upcoming online Pottermore experience which will launch in October. The video clip has very nice paper artwork including kirigami and paper sculpturing. See the artwork in this video or go to the Pottermore web site. 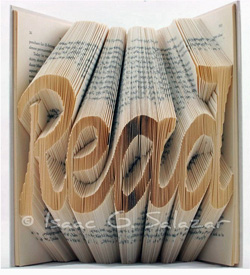 “Book Art” artist Isaac G Salazar has been transforming books since 2009 and his craft speaks for itself! Using only old books, he folds the pages to create messages. Some of the projects require small cuts, but for the most part, the books are intact and may be sprayed to protect the color from fading. You can see his books on his flickr site or on etsy. 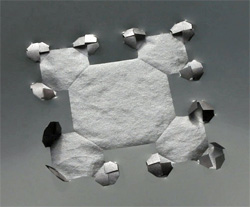 French origami artist, Etienne Cliquet, shows how his simply-folded micro-origami structures unfold when placed in water. A computer-controlled machine was used to cut the tissue paper which was then folded by hand and then floated on water. Like reverse origami, the 2 to 3 cm fractal-like models absorb water and gracefully unfold. See video called Flottille or go to his website ordigami.net/flotilla. 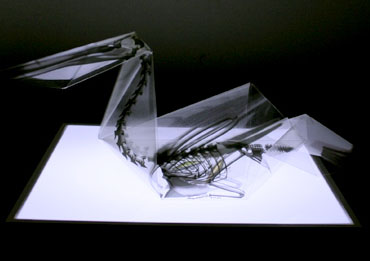 Flat sheets of translucent paper are folded into 3D origami models with a distinct museum-like feel. Embedded within the skeletal bones are images of man-made objects which negatively impact on Japan’s wildlife and ecosystem. The finished models and the crease patterns can be seen in DesignBoon. 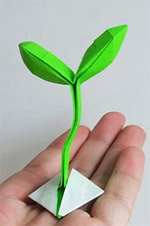 Origami enthusiast “Snowblue” created this delicate sprout to commemorate the earthquake in Japan. “The Hope of Spring” was created (and won first place) for the April, 2011 Origami challenge in the Origami Forum. 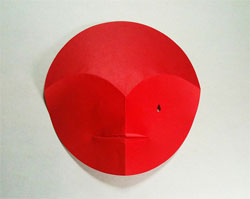 On March 11, 2011 the world was shocked to hear of a 9.0 earthquake that shook the foundations of Japan. This was followed by a destructive tsunami that annihilated the northeast coast of Japan. But it was not over, Japan then suffered the threat of a nuclear meltdown in the Fukushima Dai-ichi nuclear complex.

Joseph Wu expresses his concern with this simple but powerful piece: “A Tear for Japan”. It is a work in progress; go to his flickr site to see more. 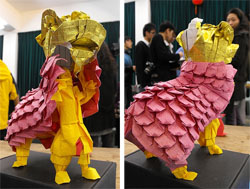 February 3, 2011 marks the beginning of the Chinese New Year, 4709; it is the year of the Rabbit. Chinese people often celebrate the New Year with Lion Dancing.

Chung Foo Cheong created this amazing paper lion similar to the lions used in traditional Lion Dancing. On display during one of the HKOS (Hong Kong origami Society) monthly meetings. Photo was taken on December 8, 2010 and uploaded in Kade Chan’s flickr site.

Matt Shlian is a self-described papercraft engineer. His works include 3 dimensional paper sculptures using elements from origami, kirigami, origamic architecture, pop-up cards, and techniques from other paper crafts. All in all, a very satisfying collection of paper art. Go to his web site to see more. 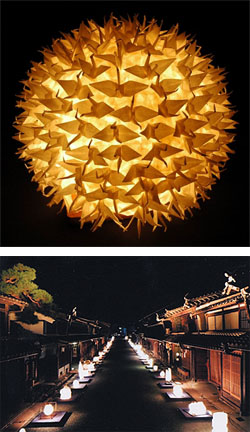 Mino is a rural town in the Gifu prefecture of Japan; it is famous for its quality, hand-made paper called “washi”.

In mid-October, the town holds an exhibit/competition where hundreds of washi paper lanterns line the streets for public viewing. Formally called the Mino-Washi Akari Exhibition, this event attracts over 20 thousand visitors and has been ongoing since 2003.

This crane lantern was on display in 2005. Photos from Brendon (http://www.trekearth.com/gallery/Asia/Japan/photo310951.htm).