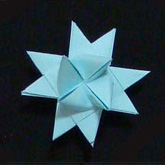 This page shows how to make a German Star using 4 strips of paper. Although the task is not particularly hard, those who have never made one before may find it a bit confusing. But after 2 or 3 tries, you will be able to make them with your eyes closed!

Fold the strips in half and trim the ends to make them tapered.

below: When completing the steps on the last strip, you will need to lift strip X out of the way in order to weave the last strip under. 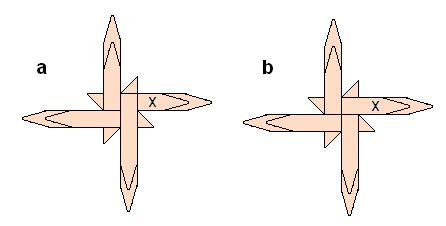 a. Turn the same strip of paper around so it is pointing towards the left.

b. When looping this strip of paper around, be sure not to flip it bottom-side up. Tuck the strip of paper under the adjacent layer and weave it through completely.

c: If you have x-ray vision, you will see that the strip of paper comes out of the points made in part 3 and 4 above.

Pull the strip all the way through. It will form a peak that is perpendicular to the points. The Moravian Star is now 3-dimensional.

Use scissors to cut excess paper.

Your German Star is done!

Note: if you are using a strip of paper that is just barely long enough to complete a Moravian Star, then here is a useful tip: instead of folding the strips in half, offset them slightly. For example, instead of folding 12″ into two 6″ parts, fold it so that one part is 5.25″ and the other side is 6.75″. When you weave the 4 strips together, let the longer part be on top.

Note: both the top and bottom side of the paper strip will be visible in the final star. Thus, you should use paper that is colored on both side. You can also use different color paper strips which make a nice effect. 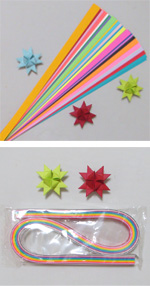 Note: Traditional Moravian Stars are dipped in melted paraffin and then sprinkled with glitter. This renders the stars water resistant and they can be hung outside during Christmas time.

The same instructions but with 4 colored strips of paper.
It may be useful to some but it may useless to others!