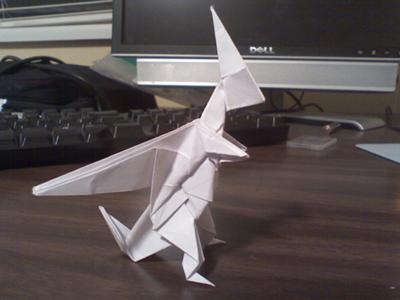 This European-style dragon is made from a double bird base. The head, wings, and tail are formed from the original bird base; the legs are formed from the second bird base; and the arms come from manipulating the wings with the center point of the original bird base. Inspired partly by a paper airplane model I once saw and partly by a technique of making bases within bases. This model was supposed to be a humming bird, but I couldn’t shape the tail just right, so it turned into a dragon instead.

I am told it closely resembles the Pokémon Charizard, although Charizard has two horns and my model has one.

See other dinosaurs and dragons from this web site.